"Given the right circumstances, from no more than dreams, determination, and the liberty to try, quite ordinary people consistently do extraordinary things." — Dee Hock

"A lack of creativity always looks like some other problem." — Scott Adams

"Trust is not negotiable. One either trusts or one does not. I prefer trust." — Dee Hock

"Unless the bad of your ideas isn't getting regularly replaced by the good of someone else's, you won't know it, but it will suck." — Nate Vander Wilt

"Shortcuts are inherently valueless and chasing them is a waste of precious time. Instead, invest steadily in the things that matter most." — Henrik Joreteg

"What if the only things with sides were coins and courtrooms? Everything else had only aspects. Would we need sides at all?" — Nate Vander Wilt

"Over the years, I've learned the best way to make sure your experience doesn't go to waste is to invest it in the people around you." — Julie Ann Horvath

"If you want to make the world a better place, you have to teach people they are valuable. When people value themselves, everything changes." — Jenn Turner

"If you automate garbage, you get fast garbage." — Bear's dad

"You are more likely to achieve your outcome if you don’t feel that your ultimate happiness and success depend on it.” — Shirzad Chamine

“You have to have an idea of what you are going to do, but it should be a vague idea” — Pablo Picasso

"Where does the compulsion to control come from? Let’s pretend that I can take my desire for control and develop it to the ultimate. What would that mean? I’d have to know every event that ever happened in the past and everything that could possibly happen in the future. I would have to go, along with desire, hope, love, and hate. If I [were to] reach that state of total and complete control, what would it be like? I’d be dead! Life is mystery. And uncertainty. To wish absolute control is to wish you were not alive. At bottom, desire for control is a death wish." — Dee Hock

"Be kind—everyone you meet is fighting a hard battle." — Ian Maclaren (paraphrased)

"Treat a person as they are, we make them worse. But treat them as they could be and we make them capable of becoming what they should be." — Johnann Wolfgang von Goethe

"Only those who are willing to take the risk of writing code that’s not perfect ever write code." — Gar

"No one will ever be a better version of you. Not ever in this lifetime. So be more of who you are." — Stephanie Maier

"Are you a person—with volition and maybe some stubbornness and at least the capacity if not the actual determination to do something surprising—or are you a tool? A tool just serves its user. It’s only as good as the skill of its user, and it’s not good for anything else. So if you want to accomplish something special—something more than you can do for yourself—you can’t use a tool. You have to use a person and hope the surprises will work in your favor. You have to use something that’s free to not be what you had in mind." — Thomas Covenant (in Stephen R Donaldson's The One Tree)

The present is the past rolled up for action, and the past is the present unrolled for understanding. —Will and Ariel Durant, The Reformation

THEOREM 5. In any finite automaton (in particular, in a McCulloch-Pitts nerve net), started at time 1 in a given internal state S1, the event represented by a given state existing at time p is regular. —S. C. Kleene, Representation of Events in Nerve Nets and Finite Automata

Blindness cuts people off from things, but deafness, cuts them off from people.

Helen Keller via this obituary of Robert Panara

The program neglects to test if fopen returns a valid handle: b or not b, that is the question. This article considers whether 'tis nobler in the mind to suffer the slings and arrows of outrageous fortune, or to take arms against a C of troubles, and by opposing end them. — Conor McBride, Kleisli Arrows of Outrageous Fortune

(what is the equivalent in the languages of Goethe or of Molière?)

The best camera is the one you have with you

When Adam delved, and Eve span, Who was then a Gentleman?

In all these difference methods one is impressed by the number of cards which must be punched by the machine and used only once or twice. ... The newer models of the multiplying punch offer possibilities ... to transfer from one counter to another and to punch progressive totals. With slight modification one of these multipliers might become a remarkable "Difference Engine." — W.J. Eckert, Punched Card Methods in Scientific Computation

(NB "progressive totals" in 1940 were what we would now call "prefix sums"; this technique was already, as Eckert alludes to, exploited by Babbage a century earlier)

... without Lemaure's voice and Vaucanson's Duck, you would have nothing to remind you of the glory of France. ...

I suppose the picture of computing is of a topsy-turvy growth obeying laws of a commercial "natural" selection. This could be entirely accurate considering how fast it has grown. Things started out it a scholarly vein, but the rush of commerce hasn't allowed much time to think where we're going. — James Thornton, Considerations in computer design - leading up to the Control Data 6600 (1963)

Here are two thoughts on water … I wonder if Dumas' René d'Herblay might have a third to add?

The theorem to be known appeared to me as some stretch of ... hard marl, resisting penetration ... the tide rises in silence, nothing seems to happen, to move, the water so far off one can barely hear it ... yet it finally surrounds the resistant substance ... submerged and dissolved by some more or less vast theory, going well beyond the results originally to be established. — Alexandre Grothendieck

This principle can be applied to the process of checking a large routine but we will illustrate the method by means of a small routine viz. one to obtain n! ... — AM Turing, Checking a Large Routine (1949)

I don't know if this is the earliest example of fac as a running example in CS literature, but Turing does tackle a slightly more complex problem than the modern usage:

... without the use of a multiplier, multiplication being carried out by repeated addition.

Computer processes have traditionally been specified by means of procedural languages. That is, a computer program is generally expressed as a sequence of steps. ... A non-procedural programming language may be defined as one in which a computer process is expressed solely in terms of the results of the process, rather than in terms of a procedure by which the results are to be produced. In engineering terms, the non-procedural language allows the programmer to define the final state ... as a function of ... initial states. — Katz & McGee, An Experiment in Non-Procedural Programming (1963)

with the benefit of hindsight, we can also appreciate their prediction that:

The extent to which procedural languages are now ingrained makes it certain that they will be with us for many years to come.

I think America is at the crossroads where it will have to choose between its greatness and its decadence.

"When Boone was asked if he had got lost in that forest, he said: I can't say as ever I was lost, but I was bewildered once for three days."

beside the point in the XIX

Now, the calculus of distributive operators is a subject of great extent and importance, but Grassmann's view is the more comprehensive ... . For every quantitative operator may be regarded as a quantity, i.e., as the subject of mathematical operation, but every quantity cannot be regarded as an operator; precisely as in grammar every verb may be taken as substantive, as in the infinitive, while every substantive does not give us a verb. — JW Gibbs, On Multiple Algebra (1866)

... in which we learn that Iverson had antecedents in linguistic parallels, and Gibbs lays some groundwork for Backus' 1977 Turing Award lecture.

to be ⇐ to be — Simon Garland (but then again, how many princes operate in Bool?)

It was on one of my journeys between the EDSAC room and the punching equipment that "hesitating at the angles of stairs" the realization came over me with full force that a good part of the remainder of my life was going to be spent in finding errors in my own programs — Sir Maurice Vincent Wilkes FRS, FREng, DFBCS

The potential problem with the PM: Like all inhabitants of 10 Downing Street, he wants to take his place on the world stage. But people on stages are called actors. All they are required to do is look plausible, stay sober and say the lines they are given in the right order. Those that try to make up their own lines generally do not last long. — Sir Humphrey Appleby, GCB, KBE, MVO, MA (Oxon)

It would appear that Sir Humphrey is somewhat more optimistic than de Maistre. 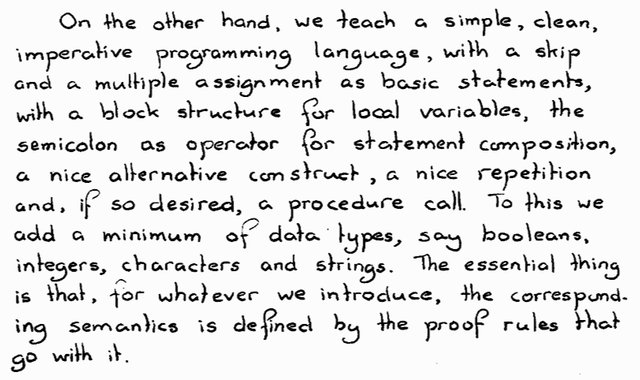 is from "On the cruelty..." and while unicode fonts now give us the opportunity to easily play the syntactic games of the immediately prior paragraph, replacing {True,False} with the less-interpreted {◉,◎}, I have to admit that, some two decades after having first encountered this passage, I am increasingly convinced of Dijkstra's approach, in this paragraph, to semantics.

(the distinction between functional and imperative is largely [cf Hehner] moot at such a low level; his description of the procedure call as a matter of taste is correct insofar as it "merely" provides a shorthand for formulae; and I'd even be tempted to more austerity: booleans are to integers as characters are to strings, while skip is a derived notion, as the identity for the semicolon.

Then again, I am an unregenerate purist: while I can understand that the modern applications programmer might be happy to call libraries, finding bit-twiddling and finite-state machines to be things of a musty past, I don't see how anyone can claim to be a hacker without a fundamental grounding in bits and machines sufficient to abstract to information and automata.)

They're still findin' out what logics will do, but everybody's got 'em. — Murray Leinster

(in a story published in the mid-XX: well after Pandora's; slightly before Kleene)

Correction: Darius Bacon points out that Boole was before Peano in pointing out the connection to Taylor: